Avian Bird Flu H5N1 has been found in a dead turkey on a farm in France.

This foul finding has led to the demand of fowl dropping.

With a 30% drop in France, sales of poultry are now paltry.

The Japanese have stopped these fowl imports to the Land of the Rising Sun.

Meanwhile French President Jacques Chirac assures us that French drumsticks are still fine and dandy to eat. (DINDE which sounds like DAND is the word for goose in French, so tuck that one away for another day).

This was a different tack to the French response to British mad cow disease....

In the meantime let's use the avian bird flu to our advantage and have a look at some of the many related words that you will find in the various 200 Words a Day! courses, that are used in accelerated foreign language learning.

While we have no knowledge of how to protect yourselves from this avian menace, we do have quite a few fowl words that can speed up your vocab and language learning.

Check out these samples, and let's keep our fingers crossed that the scientists and quacks can conjure up some decent remedies...

Is Avian Bird flu bad for everyone?

Hey, it's not going to be bad for everyone. Once it crosses species barrier and strikes us humans, thousands of us will be flocking to our doctors in the hope of some immunisation.

While the boffins toil over their bubbling beakers and formulae, let's take a peck at some of these bird flu related examples that can speed up your German, French, Spanish, Welsh vocabulary learning...

By the way whatever happened to SARS?

Try this 'Learn Spanish' Bird Flu Tip
- The RETURN of the VULTURE.

This sounds like a Western movie... and indeed a Western theme is appropriate, particularly as the bird flu could provide good pickings for the vultures of the world, who like to feast on fresh carrion.

... means the return, and is a feminine word, hence a female character is being watched by our potential H5N1 transporter - a vulture...

la vuelta in Spain also means change, as in "Keep the Change!"

That is why the our feathered H5N1 transporter, the vulture refers to CASH. Get it?

200 Words a Day courses teach words with word-picture association cartoons like this, making it possible to learn words and their genders in a fast, efficient, effective, and fun style. Because of the numerous memory hooks, remembering things becomes so much easier.

How else do other courses teach gender?

But if you add in a Gender Trigger, with an unforgettable picture that links to the word... hey presto it is planted in your grey matter.

The French word for hen or chicken is...

So we give you a hen at the swimming POOL with a POLISH actress, Isabella Miko. 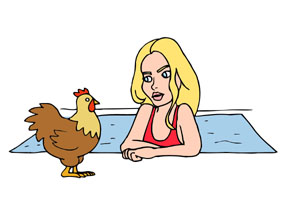 Isabella being a POLE (which sounds a bit like POULE) is used here as a Memory Trigger and Gender Trigger.

To remember these word association pictures, you will just listen, watch and absorb the French word, then the Memory Trigger as it is voiced by a female (because it is a feminine word)...

... yet how many courses add in these simple, yet powerful tools?

The German word for lazy and for rotten is ...

So to remember these we give you a lazy, rotten FOWL!

And, of course remember in all these cases .... when you learn a base word or root word, such as faul, this gives you a tool to recognize other words, that use it as a base.

faulenzen is the German word for 'to laze about'.

So get this material into your subconscious, and it provides a solid building block on which to further build your language learning skills!

The Welsh word for hen is:

So we give you the picture of an Chicken Woman running around the YARD. 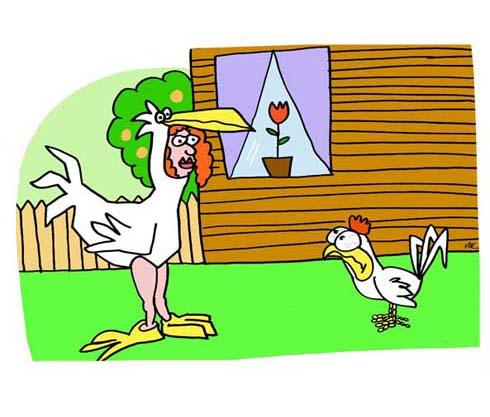 The word is a feminine word, hence Chicken Woman acts as the Gender Trigger.

To remember these word association pictures, you will just listen, watch and absorb the Welsh word, then the Memory Trigger as it is voiced by a female (because it is a feminine word)...

yes... get it, as we do for all languages, where appropriate we use a simple technique... feminine word, female voice...

... yet how many courses add in these simple, yet powerful tools?

To get get your accelerated vocab language under way now, click here on this link.