La Fiesta de San Fermín, or Festival of San Fermin is one of the most memorable events I have visited in many years of travelling.

There's more action there than a Bruce Willis movie.

It is a week of riotous celebration, bullfighting and the world famous Running of the Bulls.

Tens of thousands of visitors from all over the world, descend on the town, jamming its hotels, bars, campsites and streets, with a sea of white and red.

Any visitor to Spain, especially the more adventurous, should book-mark the dates of the Fiesta de San Fermin (July 7 to July 14) and make a visit.

...and what better way to work on your Spanish language lessons and Spanish skills. 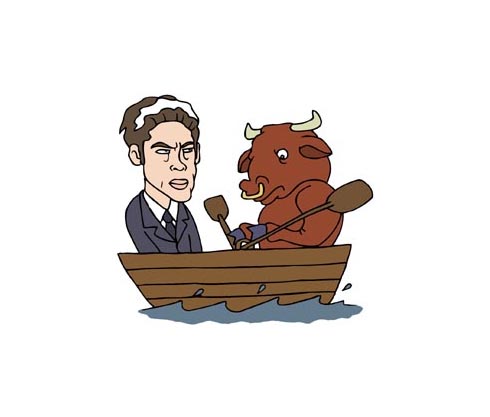 The Origins of the Festival - La Fiesta de San Fermin -

La Fiesta de San Fermín originated in 1591 when 3 festivals - the San Fermín festival, town fair of Pamplona and a celebration of bullfighting were combined in to one.

Saint Fermín was a Pamplona bishop who travelled far and wide converting people to Christianity.

However his views were not shared by everyone and he met his bloody end in Amiens, France where he was beheaded.

The Pamplona locals have since honoured him with a festival in his name. Everyone dresses in white, with a red bandana, and red sash, in memory of the blood shed by the martyred Saint.

Every morning, during the La Fiesta de San Fermín festival week, the bulls are let loose in the streets and run from various points to the bullring.

When we went, some years ago, we watched from the comfort of the seats inside the bullring (Plaza de Toros) with thousands of other less athletically inclined people.

Thousands of (mainly) men however, run the streets with the bulls. It is absolutely amazing to watch, and every few years one of the intrepid runners ends up dead.

Certain streets are boarded up so that the bulls are channelled eventually to the bullring. And everyone is welcome to run along with.

The spectacle of thousands of sprinting men pouring in to the bullring followed by a couple of dozen rampaging bulls was one of the most hilarious sights I've ever seen!

Amazingly there were very few injuries and no deaths the year we were there, but there must have been 2,000 men in the bullring while a number of bulls charged through them flinging them aside like rag dolls at times.

The bullfights themselves are a gory, cruel and bloody spectacle

As a cultural festival they are fascinating, and the bullfight is more of a brutal dance ritual than anything else.

Bullfights at the Fiesta de San Fermín Festival were scheduled in the afternoons at the Plaza de Toros.

el toro - is the bull in Spanish

This word will become engrained in your mind if you do visit the Fiesta of San Fermin, the Annual Festival in Pamplona.

Of course, users of the 200 Words a Day 'Learn Spanish Courses #1 and #2' will know that the Spanish word for bull is el toro. And it is taught so that you remember it and you can recall it when you want it.

We teach this with a picture of a bull learning TO ROW a boat with Spanish actor Benicio de Toro.

The famous actor (1) makes it more memorable, because you tend to remember famous people and celebrities better than ordinary folk and (2) acts as a Gender Trigger© to remind you (forever and a day) that the word is masculine. It is spoken with a masculine voice on the CD-Rom to further remind that it is a masculine word, and the text is colour-coded blue.


It did not take us long to realise that not all bullfighters are equal, and the lower rated toreadors or matadors were scheduled earlier in the programme than the superstars.

When the maestro appeared, it was obvious that he was different to the preceding acts. He entered the arena and stood erect and proud. The locals leapt to their feet and applauded wildly. This was the man that they had been awaiting.

In action, his style and grace were clear to see. At that moment you knew he was a master. His movements were flowing and elegant, better than the other toreadors on the day. It was a dance, a waltz.

When he decided the moment was due, his coup de grace was quick and efficient. With one clean, direct thrust through the shoulder-blades, he slayed the helpless exhausted beast. It collapsed in an instant, at the maestro's feet.

Not for the maestro were the actions of the toreadors earlier in the show, who had to hack and thrust a few times to finish their poor, injured animals off.

No doubt bullfighting will be outlawed eventually. European rules will undoubtedly, one day, see its demise, and the Fiesta de San Fermin will take a different course.

In fact, one group is nowadays making it their business to be so. They march through the streets naked to protest against the treatment of the bulls. This is no cock and bull story!

They call it the Running of the Nudes.

The Festival of San Fermin is well worth a visit, but only for those with a strong constitution.