...so to remind you of the word in French for also, just imagine that you like OSSIE Osbourne, and also many an AUSSIE...

The cartoon of OSSIE and some AUSSIES will remind you of the word 'also' in French.

The French for also is aussi. You will find recalling words more simple when you have a Memory Trigger™, and word-association cartoon, such as this one ©

This is one of many examples in our courses of getting you to remember a word by giving you a famous person as a Memory Trigger™ or Memory Hook.

The character can also serve another purpose...

...that is for helping you to remember the gender (sex) of a word in languages that use genders, like many European languages because ...

For nouns, if the word is masculine our cartoon's main character will be a male, and if a word is feminine, the main character in the Memory Trigger cartoon will be female.

The pictures are all accompanied on our software programs with audio that you can hear to further reinforce learning of the word, and of the Memory Trigger™.

... and furthermore, the voices that narrate the words are male for masculine and female for feminine, using native speakers for the target foreign language voices.

Each and every word in our courses has a unique Memory Trigger © with a cartoon like our one here of OSSIE and his AUSSIE mates... helping you to remember that the word in French for also is aussi.

Here is a screenshot of another French word which also features a famous person, and this will give you an idea of how the course looks as you work your way through it. 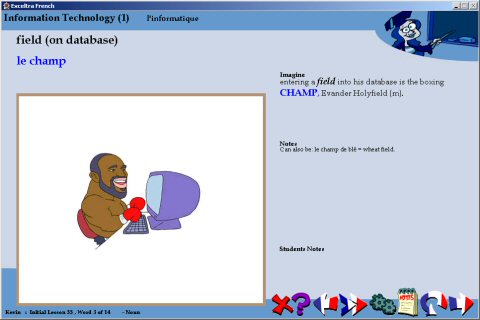 Screenshot of a 200 Words a Day! program in action teaching a French word with a Memory Trigger cartoon, audio-visual, multi-media learning that you will find easy, fun and very effective.

So here's a question, if is OSSIE was masculine, is aussi a masculine or feminine word in French?

Of course, you didn't fall for that one...

To rapidly build a solid base of vocabulary, with terrific tools enabling you to remember French genders, words and phrases you can rapidly learn the word in French for also, and thousands of others by checking out the 200 Words a Day system.

The French for also is aussi Cartoon