We have a cartoon of Muhammad Ali ... the boxer

We have a Muhammad Ali cartoon which is useful for language learning, because we at 200 Words a Day Roving HQ believe that word association pictures and cartoons are a highly effective tool for rapid learning and super-recall.

Our cartoon is of Muhammad Ali, the former world champion boxer.

We use this Muhammad Ali cartoon to teach students the Spanish word for almost, which is casi, because it sounds like CASSI-us Clay, which was Muhammad Ali's original name.

The cartoon shows Muhammad Ali - CASSI-us Clay when he was almost knocked out by Henry Cooper. 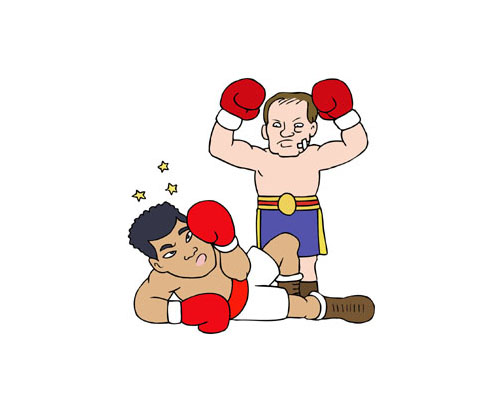 Celebrities and famous people make it easier to remember...

By using celebrities and famous people from history we are able to more quickly learn and better remember new words, and phrases.

We use loads of them in our cartoons... from Abe Lincoln to George Bush to Eminem to Michael Jordan...singers, actresses, models, sports stars, politicians, criminals... you name it.

For nouns we also use these characters to remind us of the gender (or sex) of the noun, for those languages that have genders. In these languages all nouns (things) are either masculine or feminine, and it can be quite a job to remember which is which. Languages using genders are French, Spanish, German, Welsh, and Italian.

But we make it easy with our cartoons like our Muhammad Ali cartoon.

... and furthermore, the voices that narrate the words are male for masculine and female for feminine, using native speakers for the target foreign language voices.

Each and every word in our courses has a unique Memory Trigger © with a cartoon like our Mohammad Ali cartoon.

So, as CASSI-us Clay is a male, is casi a masculine or feminine word?

Of course, you did not fall for that one...

It's neither, because it's not a noun!