Understanding SER and ESTAR in Spanish causes a great deal of difficulty for Spanish learners...

. . .made worse as it is usually taught in a confusing way...

Ask yourself this - If you could find a system that lets you overcome this problem, would you buy it?
Of course you would!

Even people who have been studying, using and speaking Spanish for years still make mistakes with the uses of these two verbs ser and estar in Spanish.

...but if you learn the correct concepts in the first place it will be much easier for you.

Beware the 'Permanent - Temporary' Trap with SER and ESTAR in Spanish

Learners of Spanish language will know that there are several Spanish forms of the English verb 'to be'...

...but two of the forms of the verb 'to be' give no end of trouble to learners.

If you have been taught that the difference between SER and ESTAR in Spanish is that one is for permanent things and the other is for temporary this could be you that is still struggling with the concept.

Beware of the 'permanent-temporary' trap which is how most Spanish teachers teach the differences between these two forms of the verb 'to be'....

This will lead to confusion.... and will delay your ever getting a grasp on these two concepts...

Even university students majoring in Spanish can struggle with these concepts!

I gave the draft of our course Understanding SER and ESTAR in Spanish to a lady who had a University Bachelors Degree in Spanish and asked her to edit and comment on the draft.

Her reply, "Oh ESTAR and SER in Spanish - I could never really understand the difference between those two!"

Yes, she had passed her degree, having studied Spanish to a high level for years, but she had not confidently grasped the fundamentals of ESTAR and SER!

You can have the tools and not become such a victim! If someone was to give you these tools would you grab them?

The choice is yours.

Learn it properly from the start... or get confused by well-meaning teachers teaching the standard permanent - temporary theory!

There is a much more effective way of understanding the differences between ser and estar in Spanish...

Even native speakers and native-speaking Spanish teachers have difficulty explaining the differences between estar and ser, because for them it is something that just comes naturally.

To learn the differences takes a little bit of effort, but once you understand the basic concepts, your levels of confusion will be conquered!

How much do you remember from school?!

Probably not much, because very little of it sticks....

...because we are so often taught without hooks to make things stick! We call these Memory Triggers and load our courses with them, so that you will remember things better.

To help you understand and remember the differences between ESTAR and SER in Spanish we have numerous accelerated learning techniques....

My name is Kevin Crocombe and as founder of 200 Words a Day! system I have spent the last few years, with my team of language professionals, artists and programmers, building and developing accelerated language learning technologies to assist the acceleration of your learning.

Thousands of users have benefited from the techniques incorporated into our many software packages.

I was expecting the humorous, creative pictures, but not the useful quizzes, audio recordings, and the other customizable options (like requiring that you type in the word to move on to the next one- very useful for spelling help!).

Using the program can be fun, but more importantly, it works!

I just got back from two weeks abroad and found that I was able to easily remember words in conversation thanks to the program.


The more complex the language being learned, the more effective are our methods!

In 2005 AVP, the second biggest software distributor to schools in the United Kingdom awarded us its highest 4 star Award for Educational Software.

There are several problems....

While this is true for many cases it soon leads the intrepid Spanish learner up the garden path and into many traps.

For example, a person is young for a long time, but that is not permanent. So does one use ser or does one use estar?

When one dies, one tends to stay dead a long time. Using the 'permanent-temporary' rule one might think that one should use the verb 'ser' when saying one is dead... but one does not. One uses 'estar'....

...and there are innumerable other examples that will trap you if you follow the 'permanent-temporary'theory.

Start with the basics...

To understand these two concepts one must go to the original Latin roots of both words, esse (ser) and stare (estar). By understanding these two concepts, you will gain the simple, basic fundamentals of the differences between ser and estar in Spanish.

...and our software teaches you these two concepts with the help of some cartoon pictures.

...but if you do not learn them you are doomed to the potential of years of confusion with these two verbs, both of which can mean 'to be' in English.

From there, we develop the fundamental differences between estar and ser in Spanish.

And give you lots more cartoons to help you remember the two.

Because the brain never forgets a picture, and humour makes learning easier.

By remembering things in a silly, zany scene the world's memory masters teach us that we can best remember things. These are people that memorize dozens of decks of playing cards... a skill that you too can easily learn!

We enlist the help of two groups of characters to help you with learning and remembering the differences between ser and estar in Spanish. Learning things with a Memory Trigger - particularly if combined with a picture, or visual image to deepen and strengthen your recall. We incorporate hundreds of graphics and visuals in all our courses.

For 'ser' concepts the Memory Triggers© feature a SERPENT. (a SER-pent... get it?) 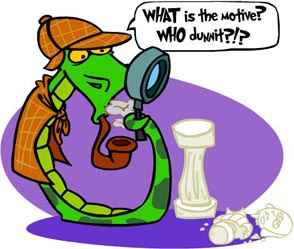 SER concepts are made easier for you to remember with a picture of an SER-pent such as our character SERLOCK HOLMES.

Characters such as SERLOCK HOLMES will assist you to remember the concepts of when to use SER in Spanish.

For 'estar' concepts, the Memory Triggers feature a rabbit, an ESTAR bunny (as a play on EASTER BUNNY)! 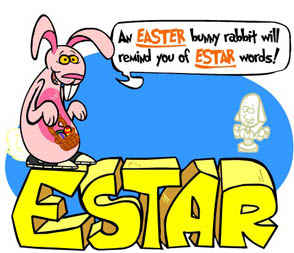 ESTAR concepts are made easier for you to remember with a picture of an ESTAR BUNNY.


Learn all the tenses of SER and ESTAR in Spanish...

We give you hundreds of examples of the uses of these verbs, in all the main tenses, so that as you progress through the course and consolidate your knowledge you will cover all the conjugations and verb tenses - present, past, future, conditionals, subjunctives etc and consolidate your Spanish with loads of practical sentences.

You will learn the fundamental differences between ser and estar, which will clearly show you why the verb 'estar' is used with being dead in Spanish. Because the Spanish equivalent of 'to be dead' is 'estar muerto'. If you have been taught that estar is used for temporary things (as taught by most teachers) you will be confused by this... and the confusion can last for years!

...But our course Understanding Ser and Estar in Spanish will teach you clearly and simply.

If you have been taught that ser is for permanent things and estar is for temporary, doing our course will quickly clarify for you, the real reasons for when to use ser and when to use estar.

For example ... you can use estar or ser with the word listo...

ser listo means to be clever.

estar listo means to be ready...

So the choice of which verb to use with an adjective is very important!

Our course will give you the knowledge!

And there is more!

So if you value your time and are willing to invest to save it, you need this course!

Yes, if your time is worth money, the amount of that you will save, by learning the concepts correctly in the first place will see you recoup your investment within a few hours!

If you are not totally 100% satisfied with the product, just return it for a full refund of the purchase price.


SECURITY NOTICE to POTENTIAL FRAUDSTERS: Our servers note your computer's unique individual address (IP address), so that all fraudulent transactions are traceable. Fraudsters will be prosecuted without exception.

YES, Kevin, I want to rapidly learn the differences between those two pesky verbs - Understanding Ser and Estar in Spanish:

CLICK here to view and order all the
200 Words a Day! Spanish Courses

We are more than happy to accept your order by phone:

Or, leave us a message with your contact phone number and preferable time to call. We will get back to you as soon as possible.

What computers will our CD-Roms run on?

For Apple Macintosh users: The 200 Words a Day! Language Learning courses can run on your Apple Mac, but require the following previously installed:

CDs are required to install the programme on to a Mac.

Not suitable for ipads, iphones.


Don't let these tricky verbs estar and ser trip you up in Spanish learning. Learn it the right way, in the first place!