The word in Spanish for stop, (the verb 'to stop') is 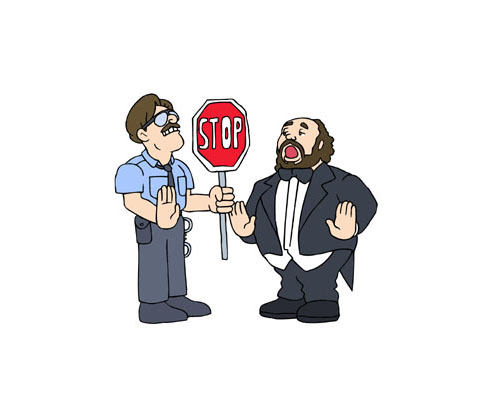 To remember this just imagine that you stop
DE TENOR Luciano Pavarotti!

It also can mean to arrest.

This is how all words are taught in the 200 Words a Day! software sytem - with a silly cartoon picture and Memory Trigger available on Windows CD.

Each and every word is taught with such a learning device, and with a cartoon picture, which is matched with native speakers pronouncing the words correctly.

Remembering the GENDER of a Spanish noun

Notice that we have a main character in the MEMORY TRIGGER©?

With all our lessons we teach you to remember the gender with the word, because this is very important in Spanish, and in many European languages. In Spanish nouns are either masculine or feminine.

When trying to remember whether a word is male/masculine or female/feminine, the answer lies in the picture.

Remember scientists tell us that the brain never forgets a picture. And when you have learned the picture, it's there, everyready, waiting to 'pop' up into your head, when you need it! As a Memory Tigger, and when a noun, as a GENDER TRIGGER©.

So in this case if we are to remember the masculine noun, the 'arrested person', the DETAINED person, el detenido, we just imagine the ARRESTED person, the DETAINING of DE TENOR Pavarotti. Being a male will remind you of the gender.

Of course, this is imaginary! Mr Pavarotti, like his voice, is as pure as fresh snow.

For a female in this case, the arrested, the prisoner, the DETAINED person would be la detenida, and we just imagine that it is girlfriend being DETAINED.

Note the gender colour coding - red for feminine words, and blue for masculine.

All there to make things easier for your busy brain.

To learn more about learning and remembering the gender of Spanish nouns click on this link.

Words and Phrases related to detener, the Spanish for stop

Once you know one word, this makes it easier to learn others... they build like building blocks of Leggo!

Check out some useful words and phrases related to detener, the Spanish for stop. The more words you learn the more you will recognize... and the more rapidly they will build together.

detener: to stop, to arrest
el detenido: the arrested person, the prisoner (male).
la detenida: the arrested person, the prisoner (female).
detenido, detenida: as an adjective means the person, or thing under arrest.
detenidamente: an adverb (like all -mente words in Spanish) means carefully.
deternerse: also means to stop or to stop oneself (reflexive)
deternerse en: means to linger over, or to delay.

So once you know the Spanish for stop you can quickly build up other related words, compound words. As said before, each word is a base, a unit, a foundation, a building block to which you can add others.

Remembering that the word for stop in Spanish is detener is made very easy with the superlearning systems of the 200 Words a Day! Learn Spanish system. Learn properly and effectively so that you never forget that detener is Spanish for stop.

What happens when words in Spanish are similar to the English

Learning without Memory Triggers is often labour lost! To remember that 'stop' in Spanish is detener, learn using Memory Triggers and the superlearning techniques of the 200 Words a Day! system.

The word in Spanish for stop is detener.